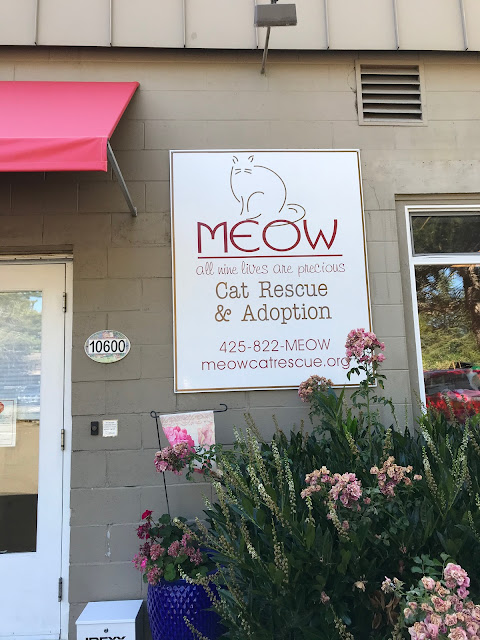 The departure of the Catzilla Brothers left us with a number of things we have no use for in the foreseeable future.  My favorite rescue organization, MEOW Cat Rescue, is closed because of COVID-19, but I asked the right people, and they took a shipment from us.
Today I dropped off:


All of these items were never used.  (Billy was actually put down before the burettes ordered for him arrived.)

The gift of Billy & Whitey, our first rescue cats, to those still waiting.

A few days ago, I wrote I didn't know how Whitey was taking the passing of Billy, his littermate and life long housemate. We wonder if he was saddened by his brother's passing, for Whitey's own time comforting us was cut short today.

I rose at 7 AM this morning, a few minutes early, raked the litter box, and was feeding the younger cats by 7:35. They both finished their meals in one sitting; Oscar did not get the whim as he often does these days to finish upstairs in private. Katherine came down to feed Whitey, and we agreed to take showers and go get bagels before the heat of the day (with a projected high of 96º). I headed up to take my shower while Katherine finished in the kitchen, including unpacking wet food ordered for the Catzillas.

We never made it to bagels. Katherine came in the bathroom as I was drying off, and said, "We need to take Whitey to the vet. He had a seizure."

She thought he was still breathing. I told her to get dressed, and I did the same.

When we got downstairs, he was still unconscious on the living floor. Katherine called an emergency vet, who referred her to two more. I looked up the number for Emerald City Emergency Clinic (where we had taken Billy in June) and called them. We decided to go there, and Katherine poured Whitey into a carrier. We agreed on the way in that he might not make it.

With Conv-19 restrictions, they came out to the car to take him in his carrier into the building. As soon they started to check him, they called us, and gave us the news.

With great sadness we announce that Whitey, age 16 and a half, was pronounced deceased today at ~ 9:00 AM at Emerald City Emergency Clinic in Seattle. He was predeceased by his brother Billy by four days, and is survived by his foster nephews Oscar and Penwiper.

Legends of Long Ago

"For it is the doom of man they forget" -- Merlin
I erred when I launched http://billy.kew.com/, it wasn't quite complete. It turns out I had not reviewed a good portion of the 11K photos I have on my disk; I didn't realize a number are missing tags for various cats.

Because of this, I'll reload the site this weekend (it will grow ~ 25%). I'll also reload http://penwiper.kew.com/ as well, as it has the same problem.

But my point (for now) is not kitten pictures; it's that looking through the archives reminded of what Billy had lost over the years.  Much of it he lost long ago enough that I'd forgotten he had it.

All of that petered out so long enough ago that I had forgotten the breath of his abilities.

So yes, our Senior Prince is due for his rest.

Rest In Peace, Your Highness.

The Catzilla Left Behind

Someone asked how Whitey is taking the passing of Billy, his littermate and housemate from birth. The honest answer is I don't know.

They were often in the same room together peacefully, and we have numerous pictures of them curled up together. At the same time, they really did lead separate lives. More of Whitey's memorable interactions in the past few years have been with his nemesis Penwiper than with his brother.

(Mostly, the Catzilla Brothers, always fed simultaneously, sampled each other's food under the theory the contents of the other bowl always tastes better. This does not aid tracking intake!)

Whitey meowed A LOT last night between 1 AM and 5 AM, but that has not been unheard of over the past year as his eating habits have gotten flaky. He's also been meowing this morning even as I write this.

(Katherine notes he also mournfully meowed when Billy was in the clinic.  Who knows?)

The thing that I just noticed is that he sat up in the blue chair and meowed. Normally, when he wants food, he comes to the human and meows directly at him/her.

He quieted each time for a bit after getting food or affection; food seems to quiet him longer. He looked headed for another nap in the blue chair, but then just seemed restless.

Now he's stretched out on the floor for a nap. All I can say to our new Senior Prince is, "Sleep well."

Requiem for the Mighty Hunter

In the past two months, kidney disease reduced Billy to 11 pounds from 12, and it sapped his energy. Daily intravenous fluid and other medical efforts could not compensate enough.

Billy's love of life could be measured by a Whiskas Kitty Treat. In his prime, the Mighty Hunter expended whatever it took to corner a such treat:

If his irrationally exuberant efforts knocked a treat he had already chased to the end of the room to the other end, off he would go after it again.

Sadly, Billy's prime is long past.

In the past week, for the first time it was safe to cradle a kitty treat, even an extra yummy Blue Buffalo treat, in the palm of one's hand to offer to Billy. The gentleness with which he took it was very sweet, but it was also not the zealous Billy we knew.

Last night Katherine handed out treats, and Whitey stole Billy's own treats from under his nose.

That Billy had stopped making efforts to extend a paw for a treat dropped a foot away said how drained he was, how close he was to end of the line.

Thus with great sadness we announce that Billy, age 16 and a half, was put to sleep today at ~ 6:15 PM at Kenmore Veterinary Hospital. Katherine was with him as he slipped away. Due to Covid-19 restrictions, I waited in the car; I had already said goodbye with a few last Blue Buffalo treats.

Billy is survived by his littermate Whitey, and his foster nephews Oscar and Penwiper.

Billy intermittently likes to sleep in the dresser drawer for my shorts. He's sometimes been nervous about jumping up when he's wanted the drawer, and so we have also opened the drawer down and to the left as needed to help him climb up.

We've left both drawers open all the time for the past two weeks or so.

I don't think Billy wants make the effort anymore, and his time is short. (He goes to the vet tomorrow at 2:30 pm.) So I closed the drawers this evening.

Twilight of a Mighty Hunter

Over the past month, Billy's kidney disease has made him slide from just under 12 pounds to 11 pounds 1 ounce.

This morning, Billy tried to hop up on my (low) desk and failed to get his hind legs up.  He fell back on the floor, unharmed.  I scooped him up and put him on the desk. He got a drink and then hopped down cleanly.

This from a cat who for over a decade easily leaped from floor to kitchen counter and then up to cabinet tops high above the humans.

I don't know why he didn't use the short tower by my desk just now; he routinely uses its mate in the kitchen up to the kitchen counter.  He must think he's still got it for my my desk, which is lower than standard.  He doesn't, not really.

He didn't seem to have good day yesterday, and today isn't looking great, either.  If he has enough subpar days in a week, we'll need to talk about giving him the long rest he deserves.

Billy was supposed to live forever.  It was hard to write this post.